The is the forum to discuss general information regarding all Carver Yachts.
Post Reply
7 posts • Page 1 of 1

Hi! This is a question for Carver 390 owners who may have put Flowscans on their boats, and are powered by with Crusader 454XLs. What are the best rpms you've found for fuel economy on/off the plane?

I've been running mostly just below hull speed, and unless I've been consistently goofing up my calculations when I fill up, my economy has been really good (about 4gph combined when running at 7 - 8kts).

At a little less than 2mpg, I'm pretty happy with that. On a run, I'll put it up on the plane and get about 14kts at 3000rpm for 5min or so to clean out the carbs, but I like the economy at 'trawler speed'.

But...if any of you have some reliable flowscan data at planing speeds, I'd love it if you share them.

Here is a virtual flow scan you can use to guestimate what you are looking for. When I had my 41C Silverton with the 8.1's, I could stay on plane at 3000rpms at 15kts - which was the perfect sweet spot for fuel range/speed.

Just bought a 39 CMY myself, except it has 7.4 Mercruisers Carbed. I am interested in seeing how bad she is going to bleed me at just planning speed. Should know in May!
Top
tonyiiiafl 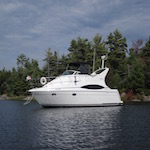 That was a pretty cool link for estimated fuel burn Lyndon. The results are very close to what I calculated for my boat last season

Ya, I always used that as a benchmark for my 41C to make sure my engines were running top notch Fraser.
Lyndon,
2000 Carver 506
FOXY JOE
Volvo 7.4TAMD
Queens Cove Marina
Georgian Bay, Ontario
Top
Lyndon670

It's something new they are trying. We will give it a try for the season and see where we are at come October. We are considering Queens Cove as well.
Lyndon,
2000 Carver 506
FOXY JOE
Volvo 7.4TAMD
Queens Cove Marina
Georgian Bay, Ontario
Top
Lyndon670
Post Reply
7 posts • Page 1 of 1

Users browsing this forum: No registered users and 15 guests